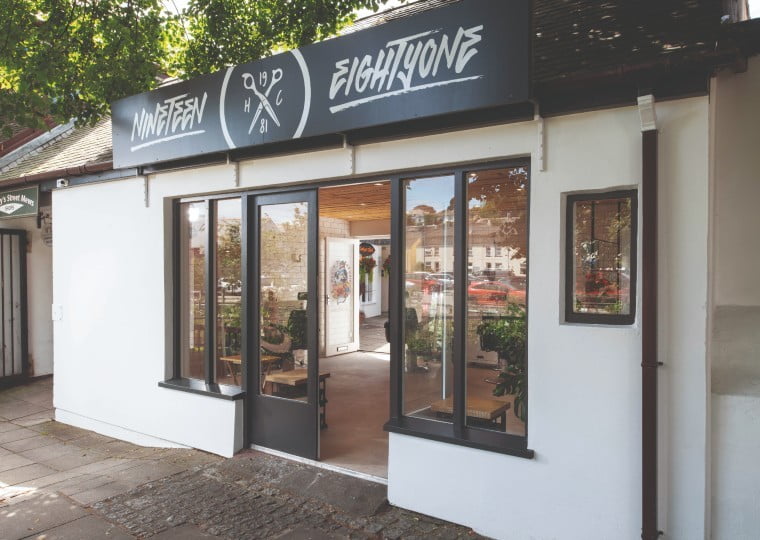 When we heard Damien Diablo had opened a zero waste barbershop straight outta lockdown, MB got in touch to interview him for Issue 29. Here’s a taster of the feature  …

Zero waste. Forget any notions of hemp-wearing hippies or lifestyle bloggers making their own tea bags, Damien Diablo, owner of 1981 barbershop in Truro, Cornwall is on a mission to change the perception of eco-living. He wants to show the industry that there’s an achingly cool (and easy) way to be green. A former hard core drummer, he’s no eco warrior princess but he is fastidious about making sure every aspect of his barbershop is eco compliant.

However when MB asked Damien how he knew he was the first zero waste barbershop, his answer was refreshingly honest. “When I looked into setting up I thought there must be someone else who’s doing this,” he explains. “Although there are hair salons doing eco colours and products, there weren’t any dedicated zero waste barbershops that I could find. But if someone comes out of the woodwork after seeing this interview saying they are zero waste too – that would be amazing. The more of us there are, the better in my opinion!”

Damien strives to be an ambassador for eco awareness and to change the face of zero waste in the barbering industry for the better. “I want to use my shop as an example of positive change,” he confirms. “The biggest misconception is you have to look a certain way to live a sustainable lifestyle,” explains Damien. “I notice this the most when I tell clients I’m vegan. Just because I’m not wearing Birkenstocks and tie dye doesn’t mean I don’t give a damn about the environment!” And now COVID-19 has prompted mass usage of PPE, the issue of plastic and the environmental impact of it has never been more timely. But let’s rewind a bit first to explain how Damien got into the industry… 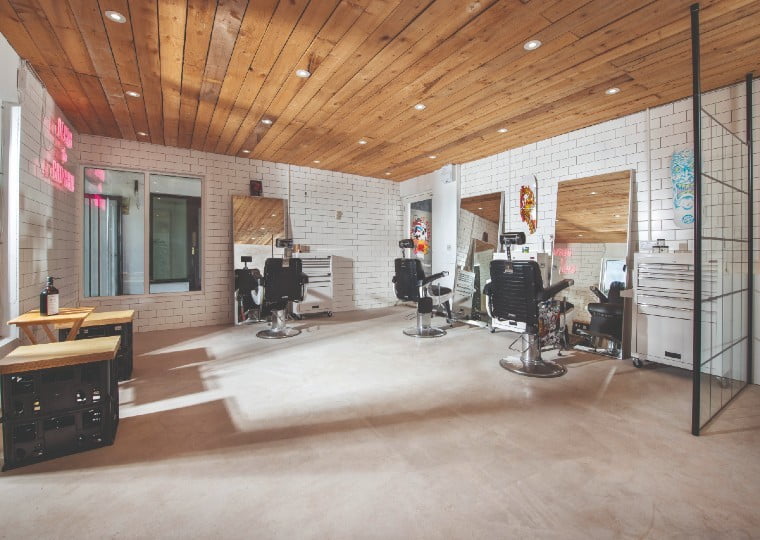 How Damien got into the Industry

Playing in bands, Damien always saw hair and music going hand in hand. It contributed to his band’s image and his barbering skills were incredibly useful on the road.

“On tour I’d always cut my band mates’ hair. I had two pockets at festivals – one from money I’d got from merchandise and the other from cutting hair,” he says. “When I started, I could guest spot in various cities and towns and earn money and tour at the same time.”

He then settled in Rugby, Warwickshire working at the much-lauded Mister Robinson’s where the ethos ‘family
first’ was a welcome mantra to Damien and his partner. However eventually they moved to Cornwall when baby number two was on the way. They wanted a lifestyle change and the opportunity to give their kids the idyllic, more rural childhood they had growing up.

Fast forward a couple of years and, peak pandemic, a premises came up during lockdown on a lease status in the Cornish city of Truro. “I just thought ‘I’ve got to go for it’,” explains Damien. “But it basically left three weeks before we were allowed to reopen on 4 July. So myself and my father-in-law got everything ready for opening in three weeks.” And so 1981 Barbershop was born.

To cut to the chase, the zero waste movement focuses on the five Rs – that’s refuse, reduce, reuse, recycle and rot. Pretty self-explanatory, no? Well, sort of.

“As a rule of thumb, if I don’t know where it’s come from I don’t use it,” says Damien. But even if you’re following ‘the 5 Rs’, there’s still a few things to watch out for. Like products containing microplastics and nanoplastics. Damien refers to them as ‘invisible plastics’ as people are pretty clued up to what their product packaging is made from now. But micro plastics, like the name suggests, can be invisible to the naked eye. And if you can’t see the plastic particles it’s understandably harder to call them out. This is particularly important if you’re washing gent’s hair in your shop – as microplastics run off into sewers and oceans. They can carry organic micropollutants such as nonylphenols (an endocrine disruptor), as well as secondary toxins that can potentially be passed into animal tissue.

So how can you tell what’s green and what’s not? As time goes on, brands know that having ‘eco’ on their label is a big selling point, so they’re more inclined to label their products as such. Although, watch out for green washing [where brands over-egg the amount their products are eco-friendly]. Words like ‘natural’ don’t mean an awful lot in terms of how eco-friendly or not a product is, so it’s worth investigating deeper.

In terms of things you can be doing in the barbershop that you might not have thought about, Damien’s got some decent tips.

“We use an Eco Heads shower head at the backwash. It filters water to make it softer, which
means you need less of it to make a lather,” he adds. “It uses 65% less water than a standard shower head, but the pressure is still awesome.” 1981 uses a renewable energy company called Bulb. They get their electricity from solar, wind and hydro sources and their gas is 100% carbon neutral and a large amount of it comes from food or farm waste. And the best part? In many cases it’s no more expensive than non-renewable energy companies. Damien also collects up hair that falls on the floor and sends it to the Clean Wave Program. They make hair boons out of it which are used to soak up oil spills. 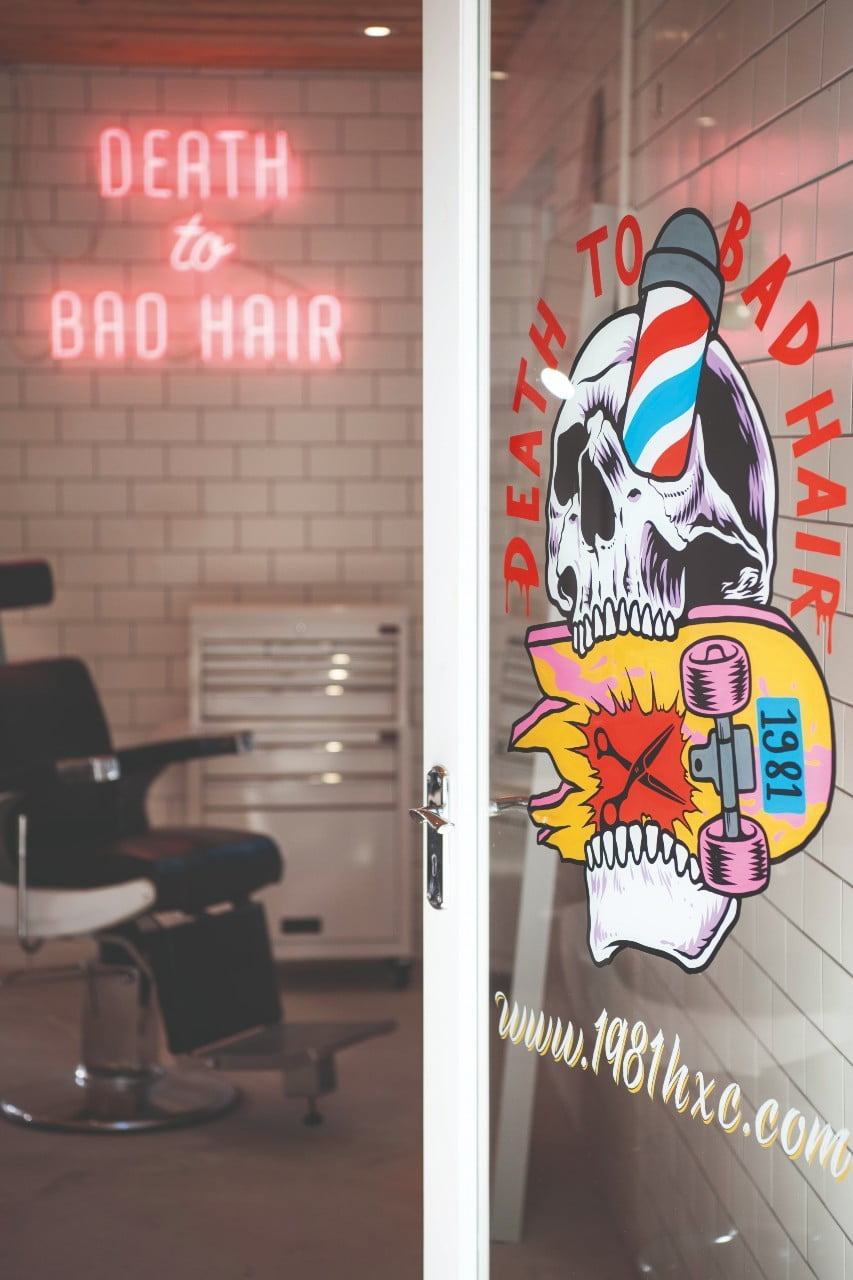 Post pandemic, the issue of PPE has been a real fly in the ointment for people looking to reduce their environmental waste. But when there’s a will, there’s a way.

“We’re using plastic-free visors from Reel Brand and gloves from Showa that biodegrade in 1-5 years, rather than 100 years,” explains Damien. “We use bio degradable compostable gowns, but we’re looking to produce our own cotton ones soon, getting them washed in our local laundry.”

“If barbershops make just one change, it could have a snowball effect”

Although not strictly PPE, hand sanitiser is another green point of pride for 1981. Their sanitiser comes from a local Cornish gin brand called Tinkture. “It’s a gin distillery that started producing World Health Organisation standard hand sanitiser during the pandemic,” explains Damien. “It’s in amber glass too which makes the product last longer because it’s reflective and it features non-plastic pump dispensers.”

PPE is one of those things that at the moment is a necessary eco evil, Damien thinks. “But if barbershops make just one change, it could have a snowball effect,” he adds.

Understandably there are barriers to living a zero waste lifestyle. People think it’s expensive and there’s that image ‘issue’ mentioned earlier. Damien believes there is a significant gender gap in green living too. “I’d say about 98% of zero waste folks in the public eye have been women,” says Damien. “But eco living doesn’t have to be feminine. Our barbershop has cool music, an industrial interior and there’s not a fairy light in sight.”

When people start looking into going zero waste it can seem prohibitively expensive. “You start and you’re like ‘woah, I’m not sure I can sustain this’,” he says. “But it’s like the meat substitute market, it was really expensive at the beginning but became a lot more accessible as demand grew. Plus people started realising you can eat loads of things that aren’t branded ‘vegan’.” The best thing Damien hears is when people are “accidentally sustainable” – say a hair product has become so mainstream people don’t actually realise its green credentials. Well, here’s to a cooler, greener future whether that’s by accident or on purpose.

This interview first appeared in the Oct-Dec Issue 28 of Modern Barber.

How the Chancellor’s Winter Economy Plan will help barbers