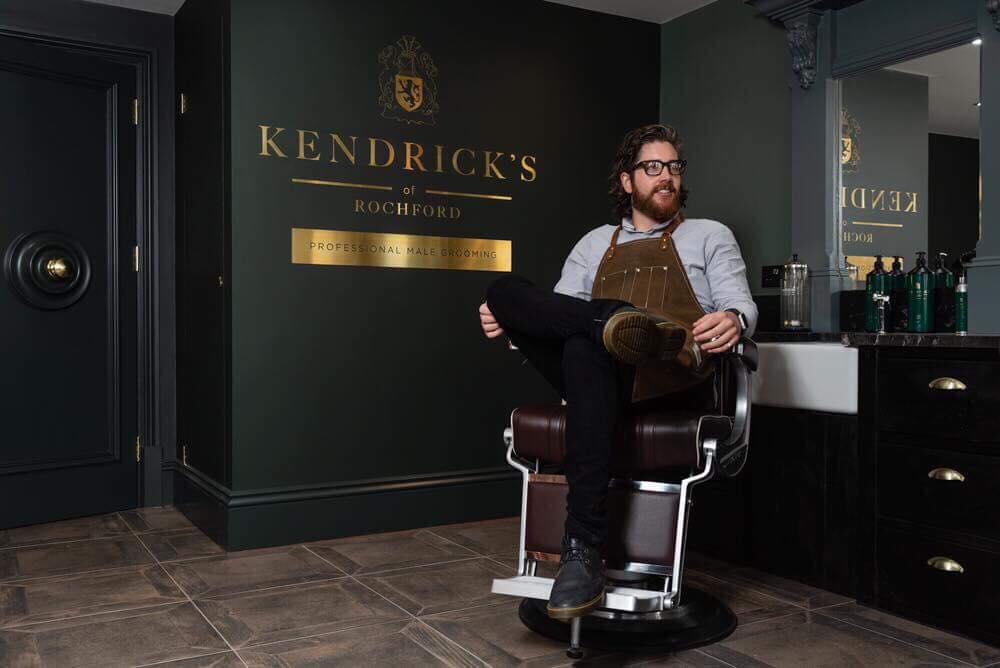 Following his days training at Vidal Sassoon and working in Mayfair hair salons, nine years at Falltricks Hairdressing Academy and running a prestigious barber shop in Leigh-on-Sea, Jonathan Kendrick has created a place he can call his own — Kendrick’s of Rochford — and it’s quite some place.

Everything from the beautifully tiled victorian doorstep to the vintage butcher’s bike carrying the Kendrick family crest has been meticulously chosen. Coming in “slightly over budget,” Jonathan Kendrick took an old greengrocer shop, that had sat empty for four years, and transformed it in just over six weeks.

Jonathan is not only a Master Craftsman, he also describes himself as “a bit of snob” when it comes to choosing what went into his shop and how it would look. Phil Burch, of PJ Burch Joinery, who fitted the salon, has worked on the design of Superdry stores and was friends with Jonathan. “We share the same design tastes so it worked well,” says Jonathan. “My favourite store interior is All Saints, I love their clothes too. That style is reflected in things like our Edison lightbulbs and rustic furniture.” The Edison lightbulbs, all twelve of them, hang above the desk from Jonathan’s Grandad’s old builder’s ladder, another nod to family, along with the Kendrick crest. Other touches include a 1920s antique barber’s pole, a traditional National Cash Register and retail shelves stocked with Kendrick’s of Rochford’s own range of products, FAB tonics, Kenchi Blades and NeoCape.

The shop is positioned within a quarter of a mile of a conservation area so the shopfront had to be green, as stipulated by the National Heritage. “Any shade of green, but it had to be green,” says Jonathan. “We went for Farrow and Ball studio Green with one wall in Farrow and Ball Smoke Green.” When asked what is the most important lesson he has learnt throughout the process, Jonathan says simply: “100% I advise people to use one tradesman to run with it — the fitting, the decorating, everything.”

Perry Moss (IG @perry_thebarber) has just joined Jonathan in the shop, the coffee is brewing, the chilled tunes are playing and business is well and truly up and running.