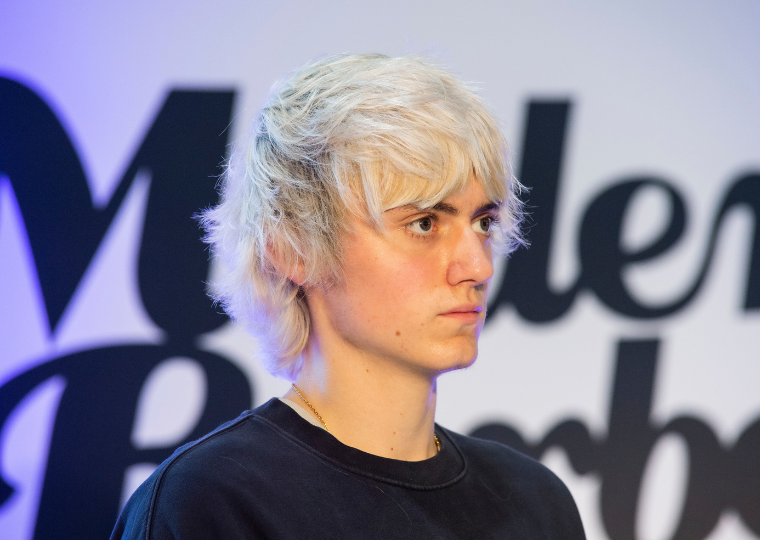 The Modern Barber Stage at Salon International 2021 was packed with the hottest trends and the biggest barbering names who took to the stage to share their expertise, such as Kevin Luchmun, Hayden Cassidy, Mike Taylor, Tom Chapman and more.

From super-sharp fades to grungy long locks, a wide range of looks were presented on the stage at Salon International 2021 and each barber taught us something new.

JFH Social took to the stage with Neil Toner to work on three fades whilst going in-depth on their ambitions, how they got to where they were now and the importance of staying positive. As advice for new barbers, the team recommended redefining the ideas of success (key takeaway: it’s not all about the money) and striking the perfect work/life balance while engaging with healthy activities to keep a positive mindset. 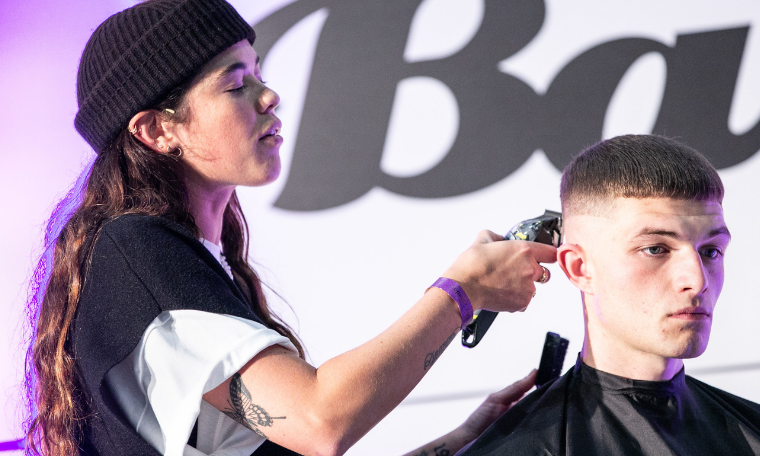 Next up, Hayden Cassidy showed off the best of the Andis range with a sharp fade, keeping the blade flat against the head for precision whilst working closely with the natural shape. She then took the weight out of the top by smoothing the blade through the hair forwards before finishing and refining the edges – or “putting a frame around the work”, as she put it. Hayden then debuted three new looks – a slicked back purple-dyed style, a slicked look tapered at the back and a curly mullet. 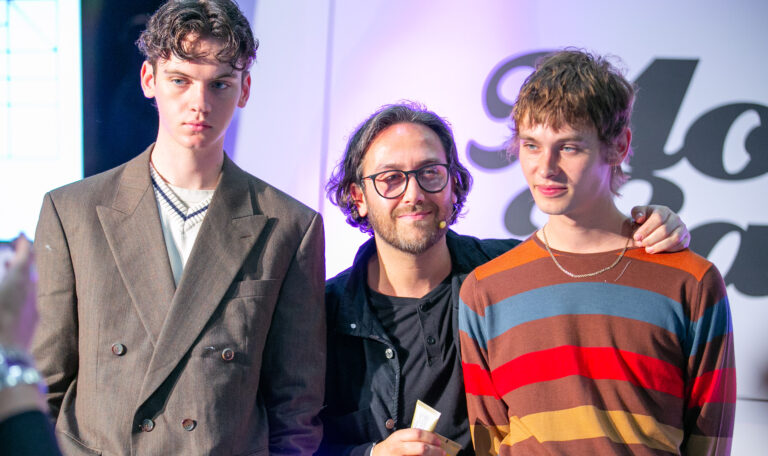 Later on in the day, the Manifesto team, headed by Rino Riccio, took on some longer hair looks with an improvisatory style after explaining their personal history. Rino’s look saw rounded graduation on the top with an interest in suitability – natural textures and fall that works with the head shape. The two other looks, handled by team members Tom and Dylan, drew inspiration from young Leonardo Di Caprio and Sid Vicious respectively, both working with techniques that made the process as natural and everyday as possible, such as adding texture with by running hands through the hair.

The HAIRDOTCOM Art Team debuted three looks on a range of different hair lengths using an impressive array of tools. Alongside two imaginative uses of natural curls, working closely to create strong shapes with soft interiors, was a whirlwind tour of expert wig use. Debuting three wig looks in the 40-minute session, one stylist ran the gamut of looks using human hair wigs including long, flowing locks and one particularly stand-out sleek beehive.

The Hairforce 1 team kicked off the day with a display of Afro expertise, bringing two graduates from the academy who had been cutting for two days on-stage, with one opting to complete the whole cut live. The trio performed a variety of Afro cuts – the taper, mid fade and low fade – and offered best practices to the audience whilst doing so. 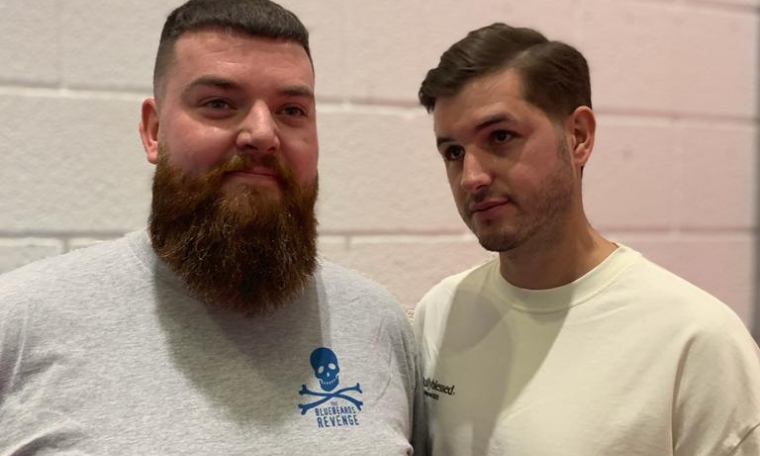 Next up, dynamic duo Ken Hermes and Dean Gleeson took on two different styles while being interactive with the crowd. Dean created a sleek look with longer length and a quiff, framed by a fade around the sides and a tidy back, whilst Ken got to work on some quality beard trimming.

Later on in the day, Dublin-based Chapter Education demonstrated two longer looks, one swept back and one swept up. Throughout the session, they handed out goodie bags to the audience whilst taking questions and spoke about how they favour feather razors over thinning scissors. 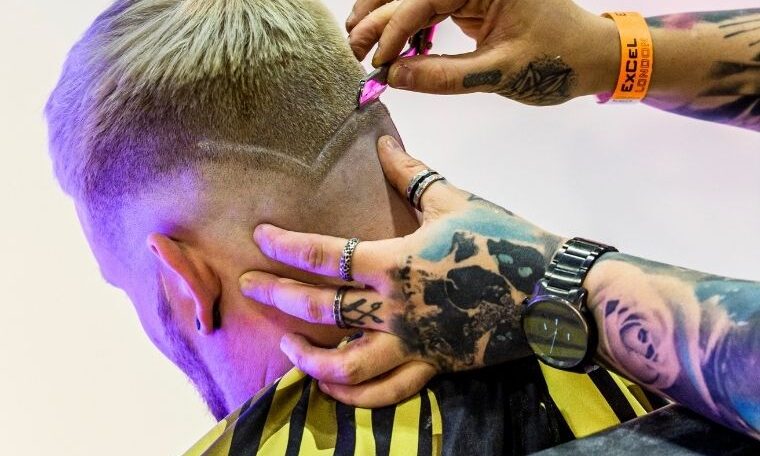 The Lion Barbers Collective, led by Tom Chapman, kicked off the day with three ambassadors doing unique cuts whilst sharing insights on mental health and suicide prevention. Following a showing of the trailer for ‘£1.7 Million Haircut’, the Collective’s short film available on Amazon Prime, they outlined the four pillars they adhere to when detecting potential mental health issues with clients: recognise, ask, listen and help. 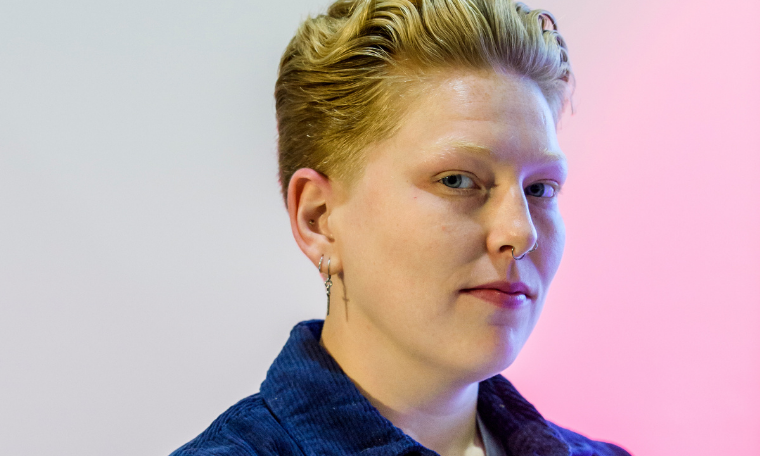 Creswell Barber Co. debuted three looks for busy barbers, fronted by Natalie Creswell herself. Whilst they completed the styles, they interacted with the audience and spoke openly about their journeys into the industry and how they made their way to Creswell Barber Co.

Later on in the day, stage host Danny Robinson had his own chance to shine for a slot with fellow team members where they got to work on some sharp fades whilst Danny offered his wisdom to the audience on how he got to be where he was now and the importance of socialising and networking within the industry. 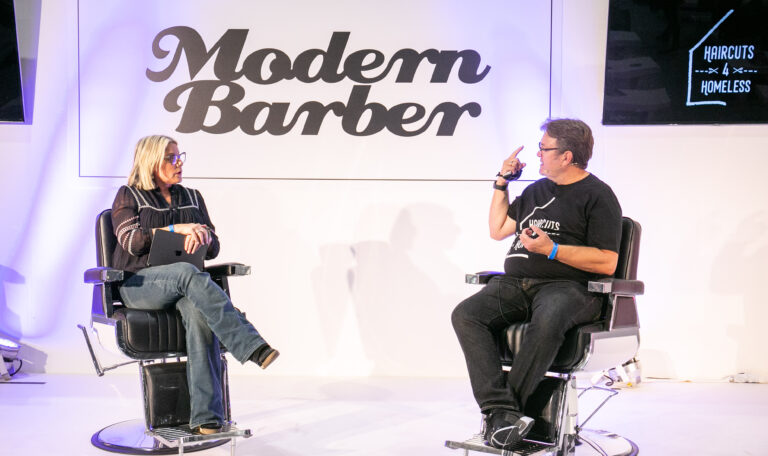 As a change of pace, Millie Kendall sat down to chat to Stewart Roberts of Haircuts4Homeless about his experience and what they have going on at the moment. Key points of conversation include an upcoming book, how emotionally rewarding the work is and candid stories of Stewart’s supporters such as Fergie and Nina Yndis.