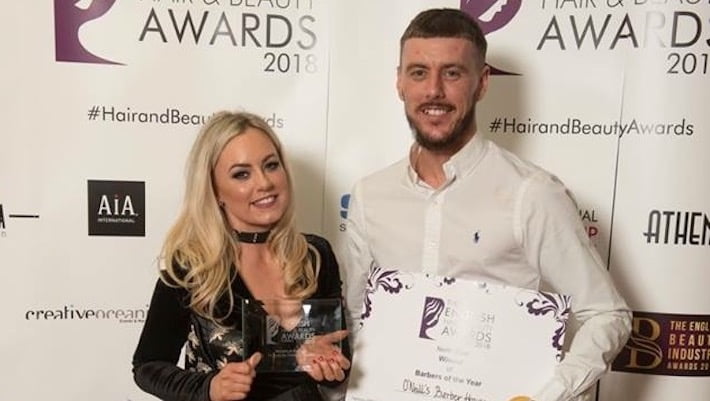 Just three years ago Darren O’Neill watched his employer, the Manchester City Centre barbershop Gentry Grooming Co, pick up Best Barber at the English Hair and Beauty Awards. Last week he walked up on stage to pick up two major prizes at the same event for his own shop, O’Neill’s Barber House in Failsworth.

Walking off with North-West and the Overall Barber of the Year (spanning the North-West, North-East and Yorkshire) awards, O’Neill’s beat eight shortlisted nominations from the North-West region, two of which were from outside Manchester city centre.

“We’ve only been trading for 22 months and have built up a great business on the back of hard work, commitment and dedication. To gain such recognition at such a prestigious event is something I could only ever dream of,” says Darren.

“I ended up working full time in Manchester city centre whilst also trying to look after my local clients in Failsworth,” says Darren. Darren realised he had about 100 clients in his mobile phone and and decided to open his own shop back in Failsworth, where he now works with apprentice Jack, and his partner Verity who runs the admin side of things. The team are on the look out for a third barber.

“My plan is simply to progress. I want to continue to attend seminars, network within the industry, put time and effort into this shop and hopefully open a second shop,” says Darren.