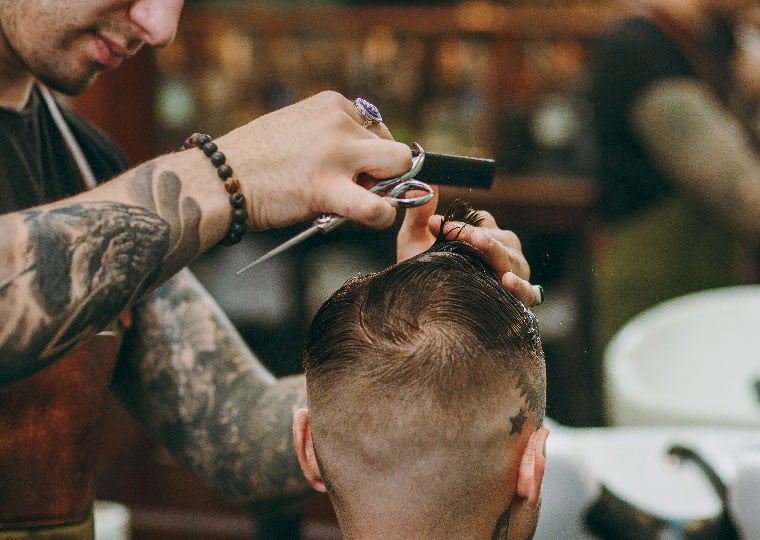 Macaully Eveleigh, owner of the Eveleigh Barber Co was shocked to find a negative Facebook review that centred on his tattoos and appearance, rather than his barbering skills.

He shared his story with MB:

“It’s mad to think that in 2020 people are still being judged for how they look, not the service they provide. I’ve got a fair few tattoos, including on my face and I recently received a negative review of my barbershop Eveleigh Barber Co in Devon. I couldn’t believe my eyes when I saw the below pop up on my Facebook page overnight. 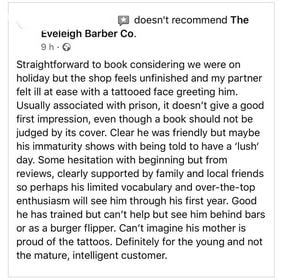 It’s my first ever negative review. It didn’t even mention my barbering work once, it just focused on the fact that I’m tattooed and the client’s prejudice about tattooed people. She insulted my intelligence, my maturity levels and suggested I looked like a criminal. It’s crazy that this type of stereotype still exists!

To be honest, the review has turned into a positive for me. After posting it on my personal page, people showed a lot of support. Barbers and the general public were outraged that she’d said those things about me. It showed me that it’s actually a very small percentage of people that think like that. If anything it has given my barbershop a good boost in publicity! And she was clearly happy with the haircut given to her husband as my skills weren’t mentioned once in the review.

I worry about the impact that this type of negative review can have on people’s mental health. It could be so damaging to someone’s self esteem. It’s a topic that’s really close to my heart as I’m a huge supporter and advocate of Andy’s Man Club and the Lions Barber Collective. Luckily I have a strong support system, but it could have really impacted someone who didn’t have that.

The bottom line is that no one should be judged on their race, sexuality, religion, as well as the clothes they wear and what they wish to do with or tattoo on their own bodies. End of.”