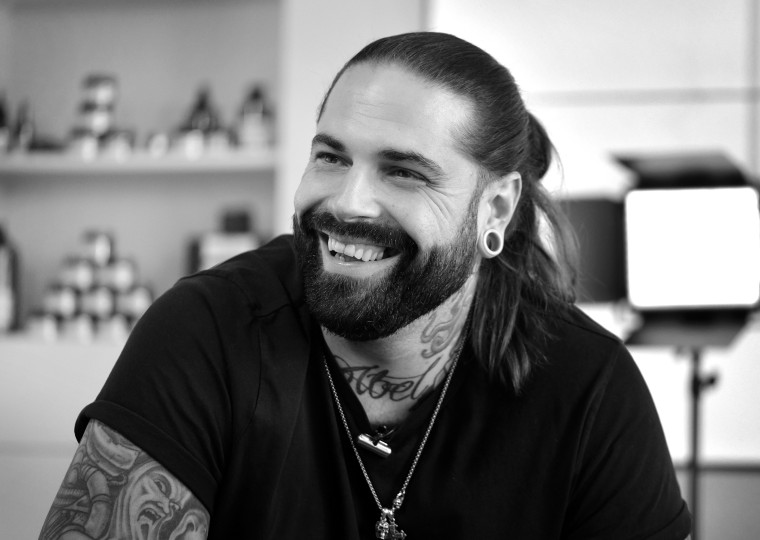 When MB calls Tom Chapman for this interview, he answers the phone while assembling furniture. If there’s anyone who has nailed the art of multi-tasking, it’s Tom. His charity, The Lions Barber Collective, launched in 2015 and has made huge strides to open up the conversation on men’s mental health and suicide prevention.

In 2021, the first Lions barbershop opened in London’s Carnaby Street. Sitting as a concession within the Warpaint store, the business works as a non-profit barbershop, so that after the barbers and bills have been paid, the rest of the profits go to charity to help train local barbers. “By providing a barbershop, we can offer the services that we want to do for our clients, and the money coming in can help support training and funding for barbers in the area. It also creates a community for barbers and hairdressers and works as a place for them to offload too,” says Tom.

The Line of Duty

But there’s no stopping there. Tom also launched the Collective Pride Awards (taking place on 17 January this year) which are designed to recognise outstanding individuals within the barbering, hairdressing and beauty professions who go above and beyond for their local community. The loss of barber Sam Wall to suicide was the catalyst for Tom to set up these awards, and one of the categories, The Sam Wall Unsung Hero Award, commemorates him. “We’ve had hundreds of entries, which has been incredible,” says Tom. “Reading through some of the entries has really heart- warming, but also tear-jerking. It’s been incredible to do something that celebrates this side of the industry. It is such a giving, loving empathetic industry, and these people need to be shouted about from the top of the rooftops.”

As Tom explains, barbers play an important role in creating safe spaces for their clients and local communities. “People feel comfortable in these spaces, especially post-pandemic where we have been isolated and had very little human connection. It’s more than just a haircut,” he says. “After reopening after the first lockdown, I was cutting a guy’s hair and he burst into tears. He told me it was because he hadn’t been touched for months. We underestimate the intimacy we have and the importance that has.”

Tom has also authored a number of books on mental health, including a new book launched last year, The Mighty Lions & The Big Match, and another launching this year, How To Listen So Men Will Talk, which details how to open up conversations with men about their mental health and wellbeing.

Discussing mental health can be daunting, but Tom shares his words of wisdom to help someone who is suffering, whether it be a mate, a client, a colleague or family member. “Don’t be scared to ask. Ask questions and ask how they are really feeling and let them know that you are there for them and listen,” he says. Rather than trying to fix their issue or create a solution, just let them know you’re open to hearing them out. And if you don’t know what to say, just be honest. “Tell them that you don’t know what to say but you want to help understand what they are going through and that will be enough. The biggest thing we can do is learn how to react and how to respond to someone who is opening up to us. Just listen and don’t try to compare their situation,” he says.

Another innovation within the charity is the launch of the Lions NFTs (non-fungible tokens) which are a form of crypto art. There will be 10,000 unique Lion Barbers NFTs, which each feature artwork of a ‘lion barber’, which will be sold on Open Sea, a trading platform for digital art. “It’s a piece of art that you will own and it will go up in value,” says Tom. Once they have sold out, the company will donate $200,000 dollars to the Lions Barber Collective. “They want it to be a safe space and community too, so there is a Discord, Twitter and live talks on mental wellbeing, it’s all about creating a community online. It’s very ahead of its time in regards to charity work,” says Tom.

So, what’s in store for 2022 and beyond? The Lions Barber Collective is planning to open new Lions barbershop locations to continue to add value to the barbering community, with the next barbershop opening at Reading train station. “I want it to continue beyond me. It’s about creating a sustainable charity moving forward,” says Tom. “If there are people who are interested in becoming a Lions Barber who are based in Manchester, Poole, Southampton, or wherever, then we’re open to working with them. It’s more about the people rather than the location. We’ve had a couple of people get in touch with us, and it’s those sort of people who are worth their weight in gold,” he adds.

From building a community to building furniture, there’s no stopping Tom and his lions.