Home Features What the barbering world will look like in 3020: Part 2 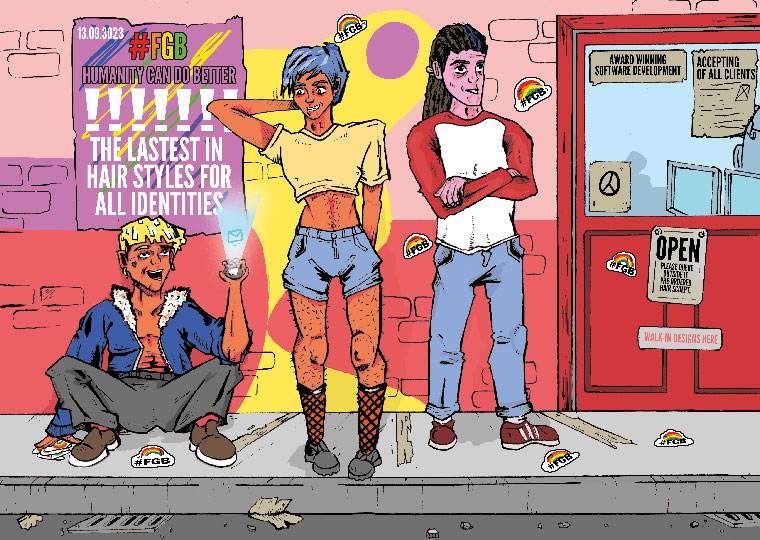 We asked three barbers to imagine the future of barbering in our feature 3020: A Barbering Odyssey. Expect cockroach-ruled dystopias, the dismantling of gender boundaries and regulation for the industry (and the rise of illegal barbershops – sigh).

The artwork for these pages was created by the talented, patient and awesome illustrator Will Marshall. He’s available for commissions so get in contact with him via email: willmarshall599@gmail.com or on his Instagram @MarshallArts99

Second in the series, Adedamola Bajomo, Tobi Adebajo and Greygory Vass of Open Barbers picture a world where gender plays less of a role in society.

“Our vision combines advancements in technology with a deeper understanding of human existence. At Open Barbers we work with a community who have a sophisticated perspective on the importance, or non-importance, of their own gender to themselves and in relation to others. Many of us crave a world where gender carries less dominance and where human dignity and community care takes precedence over old school power, historic nuances and sensitivities of every individual head, and passes no judgement on the suitability of the haircut for the person’s race, class, gender, sexuality, shape, capabilities and size.

Dictating hairstyles will be a thing of the past – that one individual might have authority to dictate the appropriateness of someone else’s appearance will be outdated. We’ll have gendered entitlement, tradition as a form of social control and simple binary categorisation.

In a thousand years, the rules of who gate keeps another’s appearance will be broken down. We won’t have a ‘bouncer’ at the door keeping women, non-binary people and trans men out of barbershops, and there will be no scoffing at feminine trans women, non- binary people and men. It will be considered ludicrous that we ever lived in a world where the entire world’s population was funnelled into two categories: ‘man’ / ‘woman’.

Hairdressing will be available from a global supply of hair designers and a menu of virtual visions. Designs will be selected, adapted and downloaded according to the wishes of clients themselves. The haircut will be made physical through delicate sculpting machinery that gently responds to the nuances and sensitivities of every individual head, and passes no judgement on the suitability of the haircut for the person’s race, class, gender, sexuality, shape, capabilities and size.

Dictating hairstyles will be a thing of the past – that one individual might have authority to dictate the appropriateness of someone else’s appearance will be outdated. We’ll have an understanding that no two humans are the same and no human can be injured in the delivery or in the receipt of a service. No more back pain, RSI, nicks and cuts or contact dermatitis. No more neck strain at basins, yanked scalps, hot tool scalds or rumbling bellies. With a shift away from capitalism designed to drive us through the pain for gain, in 1000 years we have finally come to learn that humans are worth more than their productivity.

To be human is to marvel at the unique value that we bring into this world. We will be working together as communities to survive and adapt, not pitching and bartering our labour but sharing and nurturing ourselves into states of collective comfort, contentment and peace. One thousand years from now we will be celebrating the 999th anniversary of the Festival of Global Barbering: Humanity Can Do Better.”