Home Features What the barbering world will look like in 3020: Part 3 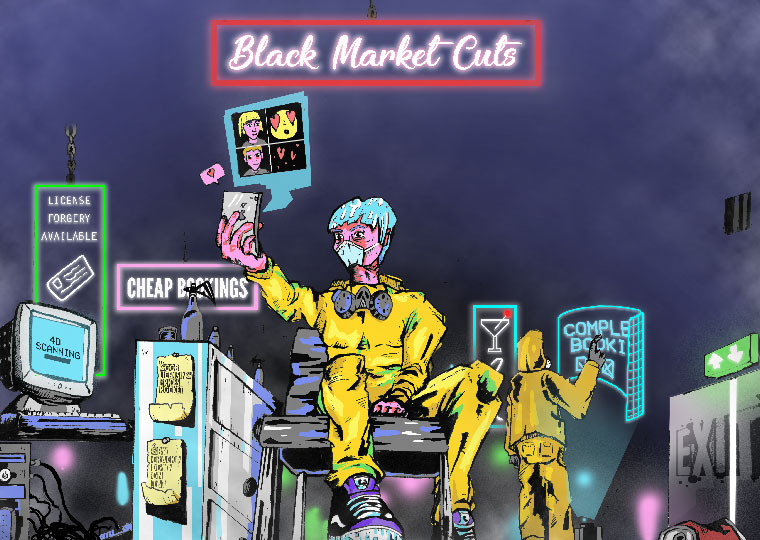 We asked three barbers to imagine the future of the industry in our feature 3020: A Barbering Odyssey, here Myles Lewis shares his. Expect cockroach-ruled dystopias, the dismantling of gender boundaries and regulation for the industry (and the rise of illegal barbershops – sigh).

The artwork for these pages was created by the talented, patient and awesome illustrator Will Marshall. He’s available for commissions so get in contact with him via email: willmarshall599@gmail.com or on his Instagram @MarshallArts99

Last, but not least, here’s Myles Lewis presenting a dystopian world where haircuts are created by 4D printers, pandemics are rife and augmented reality rules.

“Welcome to post-apocalypse now! The world is over populated and the majority of its citizens are poor. There’s just one governing body in charge now – the Governing Body of the World (GBW). DollarCrypt is the global currency and all independent governments have collapsed due to largescale corruption. The GBW is all knowing and all powerful (at least it thinks it is).

Although there’s been a move to regulate barbering, it hasn’t been the saviour of the industry that people thought it would be. You get licensed by the Global Organisation Of Barbering (GOOB), but a license costs a third of a barber’s annual wage. So only the elite can afford to get a license, which makes barbering unfair and undemocratic.

But there are an underground community of ‘slum barbers’ rising up and they’re doing seriously creative work. However if clients get a haircut on the black market they get fined. Citizens must have paperwork to prove their haircuts are legal. So a market for forged licenses has boomed. In terms of trends people are really into 4D printed haircuts as they’ve got a style guarantee of three years. But the practice is frowned upon, because only the wealthy can afford them.

The talent rising up through the slums are resourceful. You can book with them using an encrypted app that you access through the dark hair web. They meet you in a secret location, take you down in an elevator into a mysterious underground cutting world. Obviously your retinas get scanned to make sure you haven’t got any of the killer viruses that are going round.

Talking of viruses, pandemics are rife in the third millennium. The world walks around in hazmat suits and
the up-market barbershops cut through a screen that separates them from the clients.

Despite what people say about the future, there aren’t as many robots as you might think there would be. A lot of things have been put on the back burner since the apocalypse. So advances in technology haven’t been as big as they were in the early 2000s. In 3020 it’s all about augmented reality, rather than artificial intelligence. Everything is done online, especially people’s social lives. Instead of going ‘out out’, people stay ‘in in’ and hang out in chat rooms online exploring virtual worlds (travel as we know it was banned in the year 2090). Now, augmented reality has become most people’s reality.”