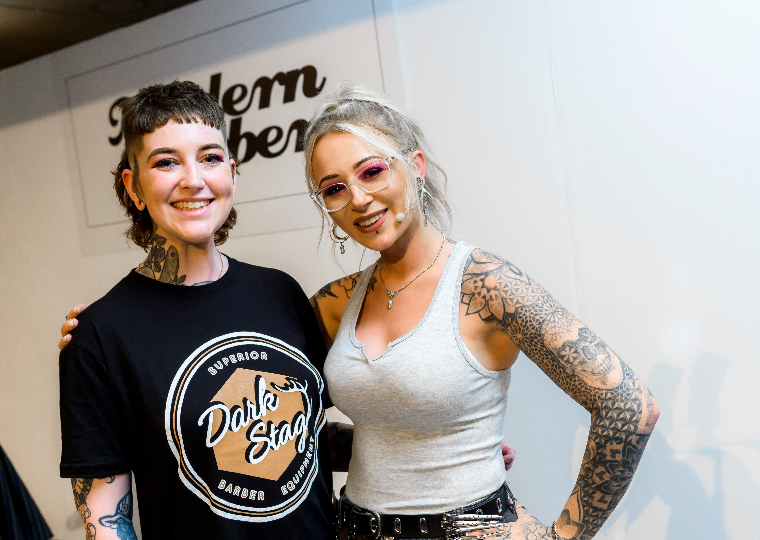 Nearly a week later MB is still catching our breath from our first-ever BARBERFEST on Monday 5 July – but for Brighton-based barber brand Dark Stag, things didn’t quite go as planned.

Unfortunately a close-contact Covid-19 warning derailed the company’s plans to exhibit at the show and Dark Stag’s staff had to scramble to keep their plans on track.

The brand’s new ambassador recruits AJ Rapture and Bridey Jo were both due to take to the MB Inspiration Stage to show off two truly modern styles on 5 July. However AJ received a ‘positive’ PCR result the day before the show; so the pressure was on for Bridey to represent the brand single-handedly and showcase her barbering skills in her first-ever stage show appearance!

Documented by Will Beare of Brighton Echo, a local content production company, Bridey made the most of the opportunity and overcame any initial nerves to present a truly modern mullet to the crowd, on her friend and model Sascha Knight. Striving to win the socially distanced crowd over with some Dark Stag merch, the Wolverhampton-based barbershop owner wowed with a unique statement cut.

Dark Stag’s founder Andy Wiseman said: “Both Bridey and Sascha represent a significant shift in the industry towards equality – one championed by Modern Barber and celebrated on the day by its award winners and attendees alike. Following a year of so much uncertainty across the industry, the publisher’s canny ambition to, ‘think big by going small’ amplified its audience, and also its star-studded lineup of stage presenters.

“It’s hard to explain how proud I am of Bridey.  Everything was set for us to get out and connect with barbers again after the most challenging time. Fate meant Bridey had to represent us alone.  What a performance and what a stage debut!”

The finished documentary of the show and the cut itself will be completed in the coming weeks; stay tuned to Dark Stag’s Instagram account @darkstagbarbertools for all developments from the company.

Andy added: “Modern Barber proved that, against all odds, a safe and secure event is possible post-pandemic. BARBERFEST’s innovative, intimate take on the traditional trade show will likely serve as a blueprint for barber conventions in the future. Dark Stag looks forward to exhibiting alongside Modern Barber at BARBERFEST for years to come.”

MB would like to thank Dark Stag for generously providing our Raw Talent Barbering Competition winners and runners up with bespoke Dark Stag goodie bags.