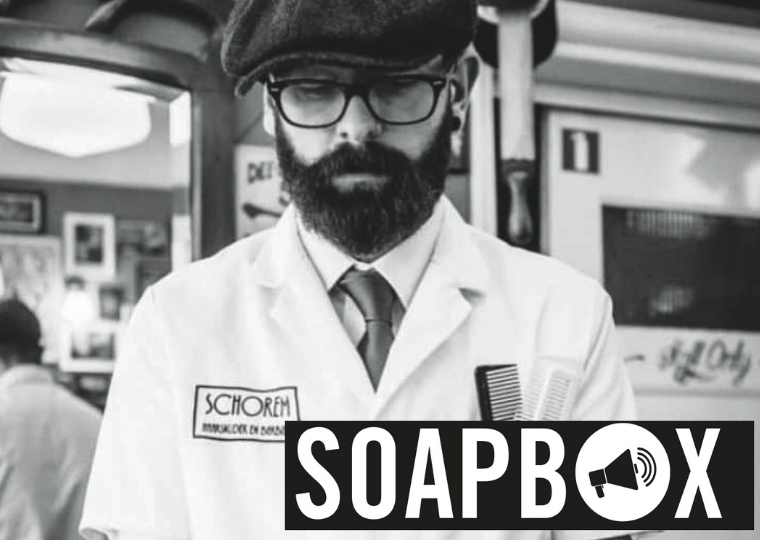 Paul Taylor-Clinch owner of Blacksails Barbershop in Bath is a firm ‘no’ when it comes to cutting prices and discounting. He takes to MB’s Soapbox to explain why and he suggests how to add value in other ways.

“I believe you can increase client loyalty and drive new business in other ways aside from offering discounts. I honestly feel that when services are discounted barbers don’t produce the best standard of work – this can only be a bad thing for the industry as a whole.

Plus, if you start discounting you’re always going to have clients chasing offers. They’ll wait to book when there’s a discount and you don’t get a natural flow of clients coming through your doors.

My belief is that you should view money as a by-product rather than an incentive to being a barber. When I first opened Blacksails Barbershop I knew no one in Bath. I did four clients a day. But instead of thinking of how many clients I needed to make money, I concentrated on the service and thought of the customers as individuals rather than seeing them as pound signs.

During the pandemic, clients might not have spent as much money with us, but I do believe they’ve realised that you don’t just come to the barbers for a haircut, you come for the social interaction too. Our trick is to make clients forget they came in for a haircut.

At Blacksails we further raise our value by ensuring we’re not just a ‘yes’ shop. If a client comes in wanting a style that won’t work for them, we’re not afraid to say ‘no’. We’re not in it for the money. We offer a 45 minute appointment for a cut and we feel this makes it more of an experience than a service.

“I don’t cut for the money, I cut for people”

We’re valued for the classic cuts that work for all generations. Our clients love to see photos of our work (ie. their hair!) on our social accounts. I opened in Bath because there wasn’t anyone doing classic styles, but now I’ve created a market for it. I used to work in Schorem Barbier in The Netherlands – even though they’re world-famous, they ensured they were never the most expensive shop in Rotterdam and they steered away from discounts. I’ve tried to take their model and apply it
to Blacksails. Our key demographic is 20-50 year olds and I want to make sure we’re attractive and affordable to both ends of that age spectrum. I’ll keep an eye on prices of the stores around me and if there’s only a pound or two in difference, I will keep prices the same. If it’s more than that, I would consider upping our prices. But apart from natural inflation or an investment in my education I wouldn’t raise prices.

I offer after hours’ training in our stores, not just to show the staff what I do, but to offer an opportunity for everyone to collaborate. We cut to the same systems, but then our barbers add their own personal flair on top of it. People come back for the same barber which is great because they like how they cut, so this builds loyalty and they become more valued.

For the sake of our industry it’s so important to raise value. Barbershops used to be the cornerstone of the community. Because of that I’m a believer in random acts of kindness. They build a community feeling. I had one guy come in on his wedding day and when he came to the till I said ‘don’t worry, it’s on me.’ Another guy reached 30 appointments – which is a lot because I have only been open a year and a half – and on his 30th appointment I covered it. I don’t cut for the money, I cut for people.”

This article first appeared in the Jan-March issue of Modern Barber, which you can read here.

Soapbox: Why barbers should cut all types of hair

How to become a zero waste barbershop

MB Upskills: How to do a cool 90s centre parted hairstyle